Rail guns: fastest way to mars (or moon) and back?

I recently took a look at some of what has been done for the Google Lunar X Prize to see what has been thought up of for launch vehicles. It doesn't seem like this is a concern for the participants, probably because they just figure they will stick whatever they are building to the end of a very large bottle rocket and aim up. I've been thinking about the problem of reusable launch vehicles and what would be the best way to get things to the moon, and thought first of rail guns. They are definitely reusable but require a ton of energy to launch something with enough force to reach the moon, and there is the issue of the earths atmosphere altering the trajectory. Then I thought, what If the railgun were in a low earth orbit, like a geosynchronous space station, that would receive payloads from earth to then blast off to the moon. Rail guns are also the perfect method to continuously launch materials back from the moon. Probably from its surface. The only issue I see now is- how do we bring that payload to a stop without destroying it. On the way back to earth its fine- if we are just sending raw material back it won't even matter if it is destroyed, just needs to hit some quiet place on target and the payload can be reclaimed. On the surface of the moon we would want those materials to end up safely- as parts or materials for building permanent structures, or materials for robots or settlers. For hitting the moon I'm thinking of how the approach would be. It would need a very accurate shot- from the rail gun satellite we would really likely attain that. Then, the spacecraft would need to be able to land without using too much re calibration of trajectory or expelling a large amount of fuel to slow itself down. This is where I'm a little stumped, probably because I don't know any of the physics involved. I'm assuming the shot that reaches the moon could enter an orbit that decays its velocity to a point where the resulting velocity is very low and only due to the acceleration of the moons gravity, not from the force that brought the satellite to orbit. To land safely I was thinking of inflating a large air bag to the vehicle that would soften the landing, and strike a surface so that the vehicle would roll on the surface and slow due to friction. I added a graphic below to illustrate- the projectile wouldn't "land" but would come in at an angular descent, gravity would cause the projectile to pull in, and on-board instruments would detect the object coming closer to the surface, setting off small amount of thrust to level the descent. 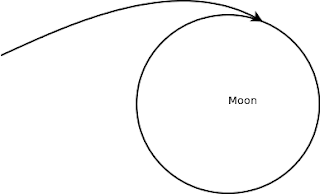 Of course, this is all just speculation. I'd love to talk to someone who can point out all the reasons this couldn't work so I don't have to think much about it anymore, but until then I'll just assume this could work.

The benefits of my approach are very clear, so I really do hope it is viable:


After thinking a bit further about this idea it became even more clear that geosynchronous orbit should be the end position of both 'sent' and 'received' payloads for each body. A gun in orbit around earth would launch a projectile such that the force used to send the projectile would help to maintain or change its own orbit or transfer energy to a flywheel. The target body the projectile is shot at would receive the payload in its orbit. Taking this a step further, a ground station could launch  a payload into low earth orbit, later met by the stage 2 launcher meeting the payload in low earth orbit. Once the payload is received and prepared for firing, the second stage would fire toward the moon, targeting a lunar orbit to meet the next stage for descent. This stage would prepare the payload for delivery to the surface.  Here, at stage 3, the payload is equipped with the lander. Lander would use reusable fuel to land to the surface, deliver the payload to the surface, and then reclaim fuel from surface material, and enter stage 4 preparation.  Stage 4 preparation would be a base station on the moon that would launch the lander back into orbit, meeting with stage 3 module.

At stage 4 it is required that material is reclaimed from the surface for future use in descent, this would be fuel to power thrust for a soft descent. I found a document here describing the fuels that can be used for the descent to lunar orbit. Another possibility for this last leg is a space elevator. Elevators on earth require far stronger material due to atmospheric turbulence. The moon however does not have this issue and could possible be built with far weaker and lighter materials. Space elevator may be the better option at a later phase, after the network of these stages is scaled to be able to utilize much larger mass.  From the Wikipedia article, a space elevator would require materials equal to 6100 tonnes for a single strand capable of tethering a counter-weight. Also, a space elevator would be subject to micrometeorites, potentially damaging or destroying a single strand system.